What is the secret to living a long, healthy life? Pharmacist Graham Phillips, who won the 2020 C+D Health Initiative of the Year Award, dispenses his pills of wisdom

It’s a sunny June day in St Albans, Hertfordshire. Graham Phillips, pharmacist and managing director of the Manor Pharmacy Group, is expecting me for a taster of his ProLongevity programme.

ProLongevity’s head office is a 30-minute walk from St Albans station. In the spirit of the active lifestyle that is at the heart of the ProLongevity programme, I decide to walk the distance, hoping this brisk walk will impress Mr Phillips.

But he would later tell me how I would benefit from more vigorous forms of exercise... Jump to Mr Phillips’ health assessment.

ProLongevity: From inception to completion

Mr Phillips remembers that, as a child, he was fat. “I'd still be hungry when I was finishing breakfast. And all the way through the next two or three hours, I'd be waiting hungrily for lunch. Then I’d eat lunch and still be hungry,” he recalls.

Many years later, his attention was captured by the 5:2 diet, which was popularised in the UK by doctor and journalist Michael Mosley.

“I immediately thought, ‘Well, I could do that,’” he says.

He lost 10 kilos but soon realised that while the diet – which consists of restricting calorie intake to 500 Cal on two days a week – had worked for him, it did not fit the “calories in, calories out” and “eat less, move more” paradigms that all health professionals are taught.

“That made me re-explore the fundamental science: I realised that what makes you fat is being hungry. That’s why all diets work for three months, and no diet works for 12 months. You can kind of live with the hunger for three months, and then you think, ‘I'm just too hungry,’ so you eat. You end up not only putting the weight back on, but you also put more weight on because, by that stage, your body’s in starvation mode,” Mr Phillips continues.

He later started following the Day Two programme, which is based on a five-year research study conducted by Professors Eran Segal and Eran Elinav from the Weizmann Institute of Science in Israel.

They studied the gut microbiome of a group of people who were given a continuous glucose monitor (CGM). “They were able to show that if you feed about 1,000 people an identical meal, you get equal and opposite reactions. What determines your glycaemic response to a food, or a combination of foods, is your microbiome,” explains Mr Phillips, who has met with the researchers in Israel and retains links with the project.

When CGMs became available, Mr Phillips thought he could use this device to the benefit of his patients. About five years ago, he devised a service that would help prevent obesity and high blood pressure, as well as reverse type 2 diabetes.

He started testing the service on friends and family. His first client was an old friend of his in his early 60s, who has had hypertension since the age of 30. Mr Phillips attached the CGM to his friend’s arm and started monitoring his glucose levels.

Within a month in Mr Phillips’ programme, his friend had lost 10 kilos and his blood pressure was lower, which meant his friend’s cardiologist was able to halve his medication, Mr Phillips claims.

“I decided that it had a life of its own and we then decided to create a proper brand,” he adds. Thus, the ProLongevity programme was born. 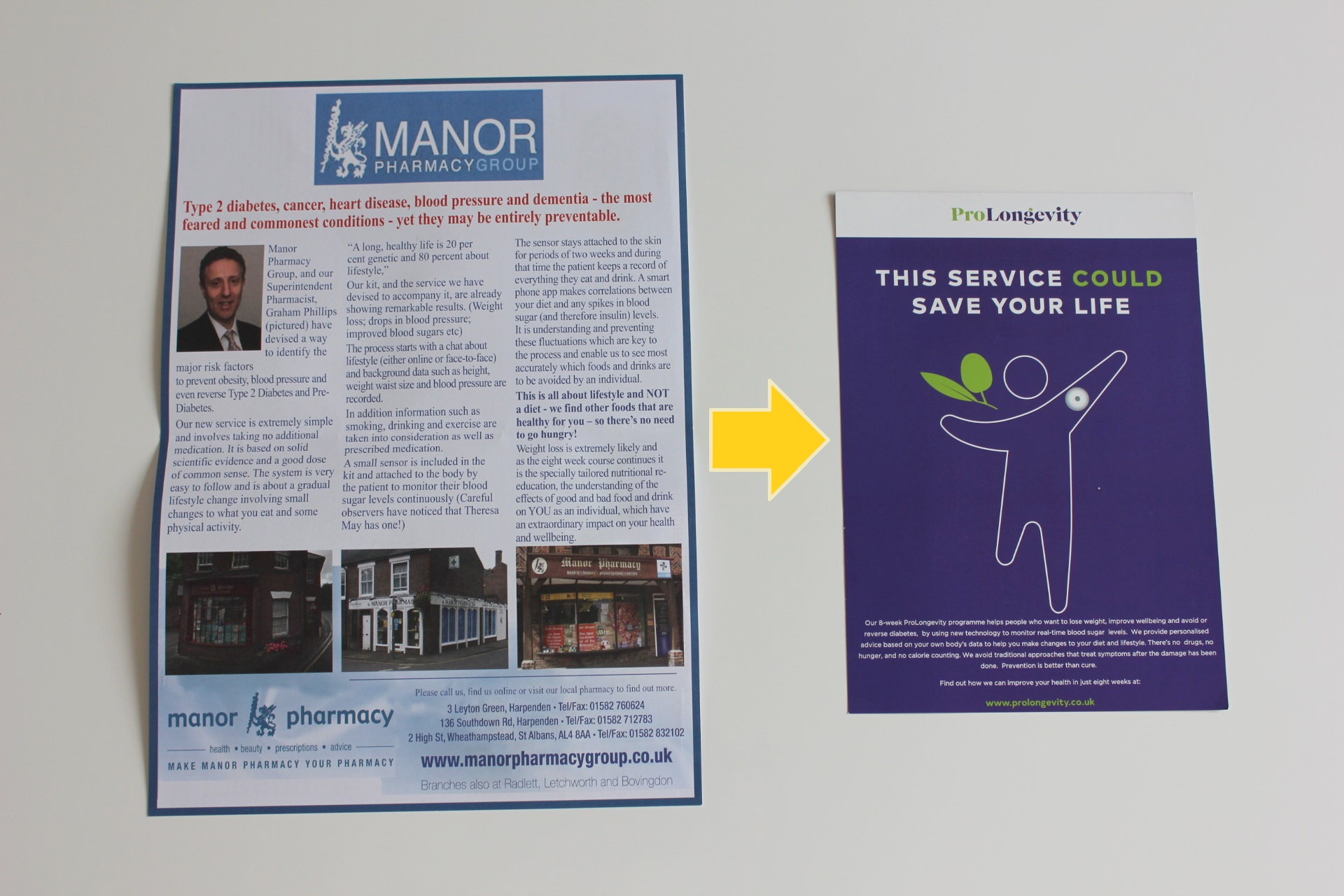 Started as a private service, ProLongevity became a brand over a period of five years

How does it work?

The ProLongevity programme isn’t open to just anyone. Mr Phillips or another trained healthcare professional first determine if the service is appropriate for a patient, following a free, 15-minute consultation.

ProLongevity offers three service plans: an eight-week version, a six-month version and a 12-month one.

Patients are provided with a CGM and are told to behave normally for the first two weeks. “By the end of week two, we’ve got the CGM data, we can see how their blood glucose is responding. We get copies of all the tests the GPs might have done, such as liver function tests, lipids, HbA1c, or blood pressure,” Mr Phillips explains.

The “big intervention” comes at the end of week two when the healthcare professional can start asking the patient what they hope to achieve through the programme.

Patients can access the data that is collected through the CGM via the ProLongevity app and are asked to keep a diary of what they eat, drink and their activities. The healthcare professional will then work with the client to come up with a series of lifestyle changes and give them advice on which foods they should eat and those to avoid.

"I think there are almost no adults that don’t have a level of health concern related to their weight, their blood pressure, or their lipids, who aren’t at risk,” says Mr Phillips who, with the help of nurses and pharmacists trained to offer the programme, assists patients worldwide across the UK, Canada and the US.

In the next five years, Mr Phillips hopes to further internationalise his programme and ultimately “rid the world of type 2 diabetes”.

For the time being, he is busy training other independent pharmacies on offering his programme, but he is open to working with multiple chains as well, he tells C+D. Mr Phillips is also growing ProLongevity’s evidence base, which he hopes to present to NHS in England and to other healthcare systems as he feels the service could help save money.

Pharmacy is about the team

On winning a C+D Award in the Health Initiative of the Year category, Mr Phillips says “there is something very special about peer recognition”. 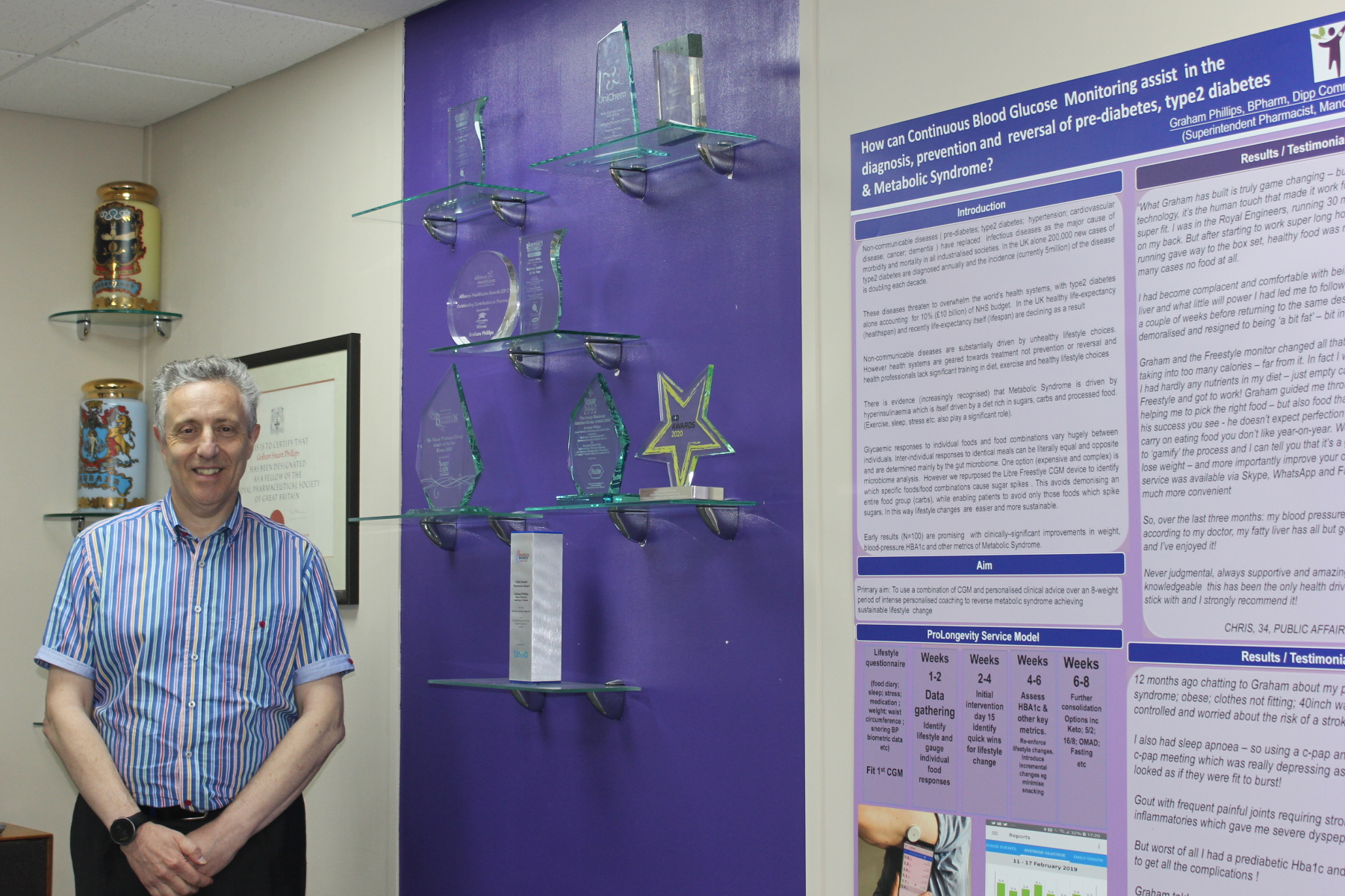 Pharmacy is very much in his blood. The son of a pharmacist and father to another, Mr Phillips is also the owner of the three-branch Manor Pharmacy group, located in Hertfordshire. While ProLongevity takes up most of his time, he regularly visits his branches.

“I think pharmacy is completely about the team,” says Mr Phillips, who trained his staff on ProLongevity and gave each one of them a CGM for a two-week experiential learning.

Mr Phillips feels the service also helped boost staff morale. “When you start helping your patients, [you don’t notice their weight loss as much as] the light coming back in their eyes and they look so healthy.

“You dispense more and more tablets into people – no one feels particularly good about that. The feel-good factor about ProLongevity is you're genuinely revolutionising peoples' health. As a health professional, that’s what you start out thinking you're going to do,” Mr Phillips says.

But he feels healthcare professionals aren’t trained in prevention and feels that healthcare training should be revolutionised so that all are trained to “understand the fundamentals of nutrition, exercise, sleep, diet… because until the health professionals know, they’ll continue to dole out the wrong advice”. 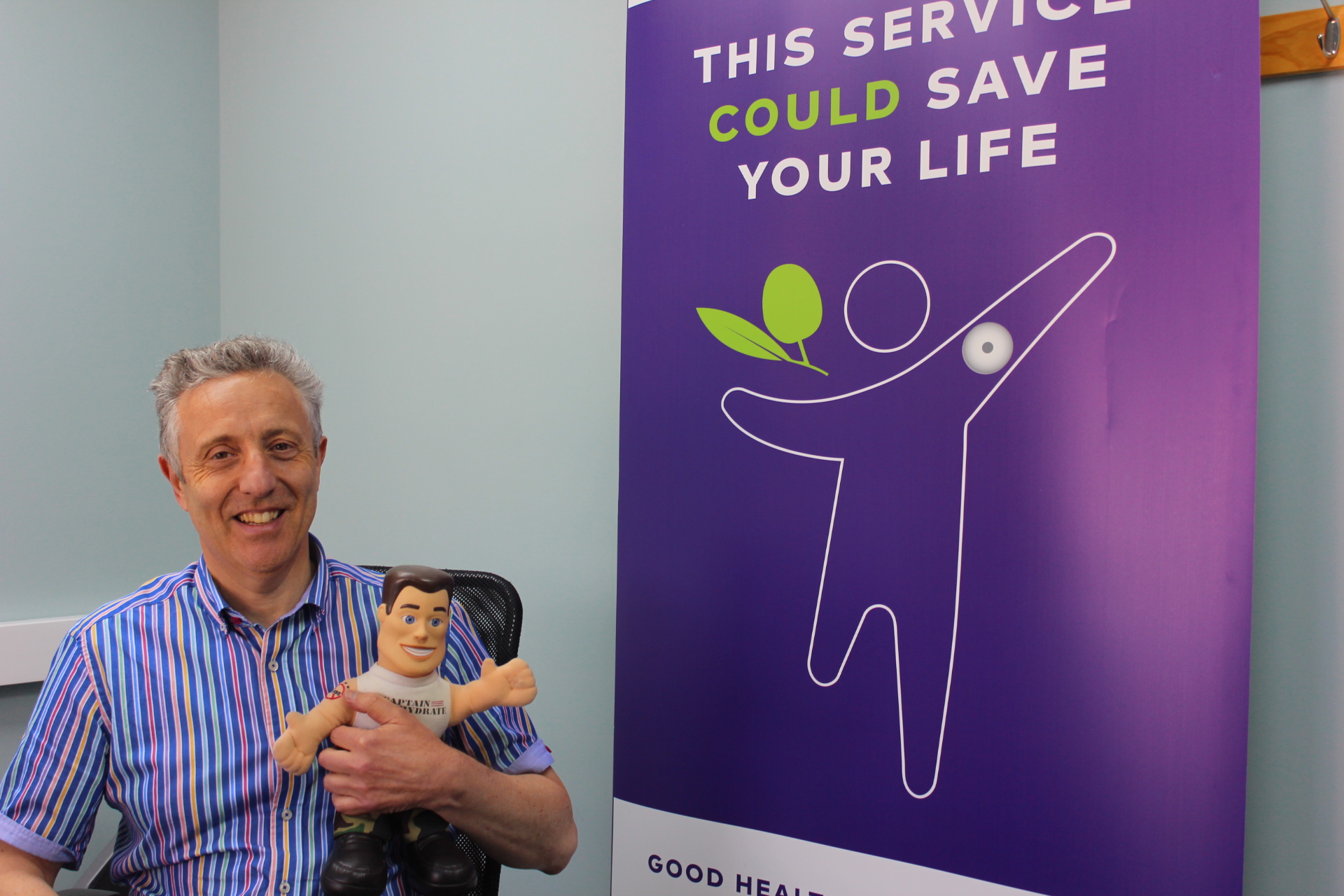 Prior to our conversation, Mr Phillips had asked me to complete two questionnaires, asking questions about my sleep patterns, exercise, body weight, typical meals.

Although I’m a healthy person overall, there are some bad habits that I should forego. Listen to the audio below to find how my health assessment went.

Do you think you could win a C+D Award? Get inspiration by reading about each of last year’s C+D Award winners, runners-up and shortlisted entries, or click on the banner below to learn about this year’s categories and to enter.

Pharmacy's role in 'joining the dots' for older people's care
16/07/2021 | 0 | Features
0 Comments
Question:
What do you make of this service?
Login or register to post comments

Job of the week